December 7, 2018 In Restaurants Reviews
Facebook0Tweet0Pin0Email0
I was invited to review the new P.F Chang’s Asian Table Christmas menu for Luxuria Lifestyle and after having a little Instagram stalk and seeing the photos of the stunning food I was immediately excited! Who wouldn’t want to try a melting chocolate snowman?!
P.F Chang’s Asian Table is located on Great Newport Street in London (10 minutes away from St Pancras) offering Pan-Asian cuisine. Luckily the restaurant was easy to find, as we nearly didn’t make it! Earlier that day I had locked myself out of my flat with only half an hour to go until we had to get the train. I’m blaming the head cold/flu I had but luckily we made it, and I’m glad we did!
We were greeted straight away and offered different tables which was kind, we made our choice and were seated. The décor was modern with a beautiful feature wall that matched the front cover of the drinks menu.

We went for a few cocktails to start which were strong but refreshing and there was a good selection including mocktails, I went for the caipirinha. The restaurant was busy, but the staff were friendly and attentive.

For our starters we went for the Crispy Asian Crab Cakes with Nuoc Cham and the Shrimp and Lobster Cocktail. The presentation was beautiful and they were generous with the lobster in the Shrimp and Lobster Cocktail.
I could really taste the coriander and lime flavours coming through with the fresh white crab meat in the crab cakes and the panko was crispy, they were large but so delicious we finished them. 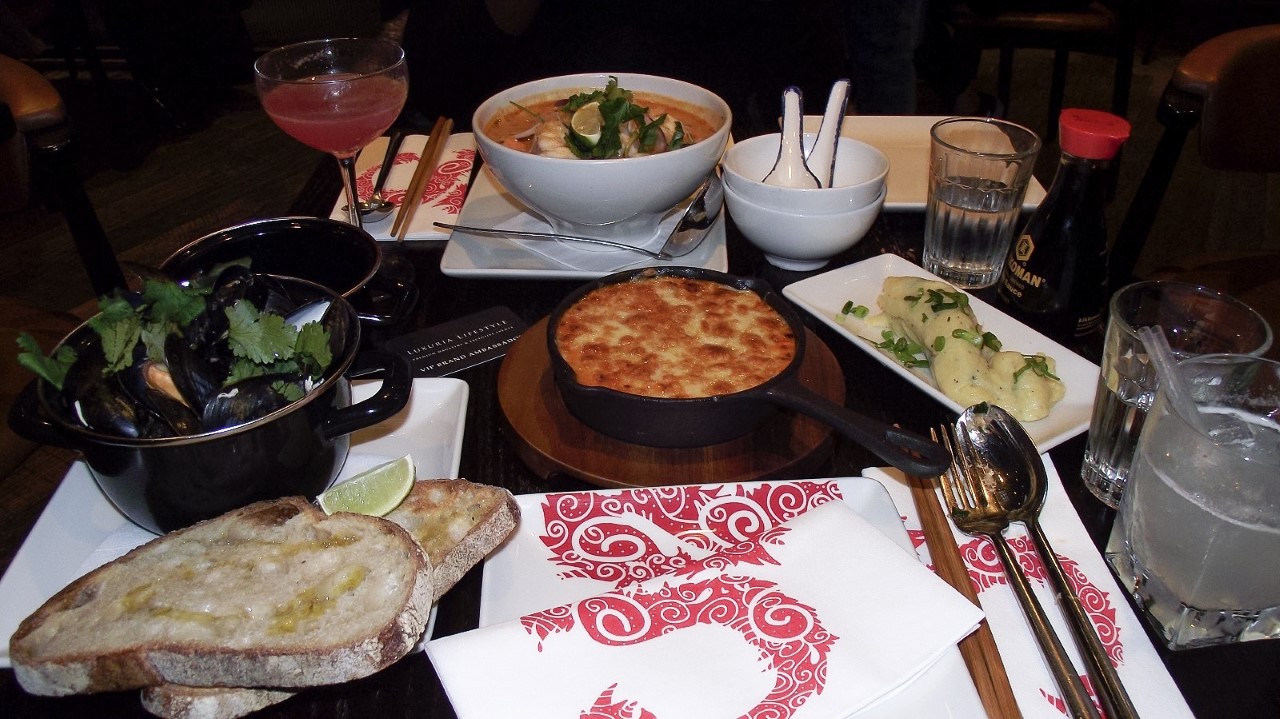 For our mains we HAD to have the lemongrass coconut and chilli mussels and they were incredible! The broth was full of flavour and perfect for soaking up with the bread.

On the side we enjoyed the Wasabi Mash and Korean Street Corn which was rich and cheesy, topped with melted mozzarella and cheddar.

We also ordered the Thai curry noodle stew with monkfish. I cannot recommend this enough! The monkfish was satisfyingly meaty and the Thai curry sauce was fragrant and delicious full of bamboo shoots, red onion, sweet potato and rice noodles

There was enough food for 4 but we almost finished it due to it being so delicious and flavoursome. We were kindly given a bottle of prosecco to go with our mains which was happily received!

Next it was time for the christmassy dessert, we were brought an igloo on a plate along with a white chocolate snowman. It was a bit sad watching him melt but I soon got over that when I saw what was inside!
Once the snowman had melted (with a little help from some warm caramel) a variety of yummy ingredients were revealed including popping candy, cocoa nibs, ice cream, chocolate soil, meringue and hazelnuts. A lot of my favourites hidden in a white chocolate, Christmassy shell.
The igloo also hid a surprise inside. The outer shell was made from mousse and the inside was shortbread biscuit at the bottom topped with red current jelly and green pistachio sponge. It was unlike anything I had ever tried and the flavours worked well together.

It’s only been a week and already I’m craving the fragrant taste of lemongrass from the mussels’ broth and the Thai curry stew, so it is safe to say I will be returning and highly recommend P.F Chang’s Asian Table. Book your table here.
Thank you so much for having us!
Facebook0Tweet0Pin0Email0

All rights reserved.
Share this ArticleLike this article? Email it to a friend!
Email sent!